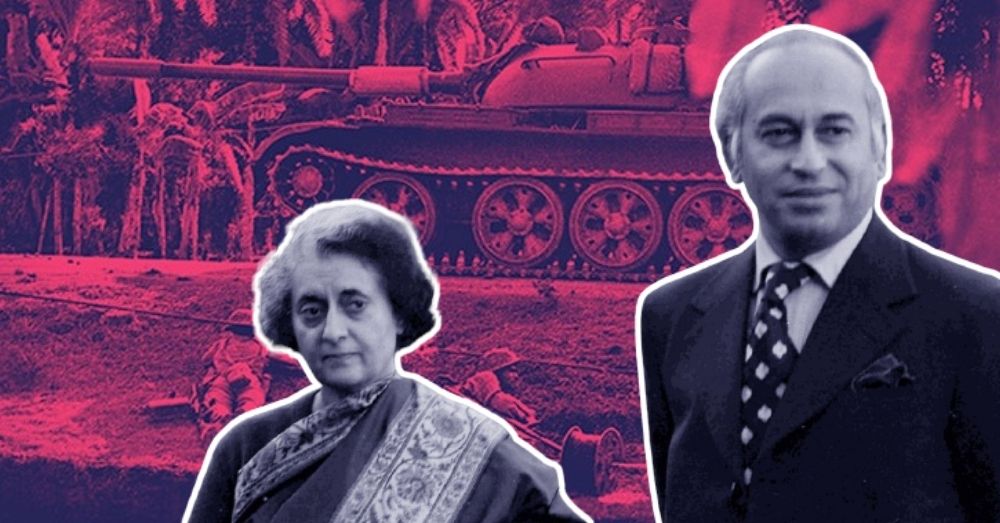 Background of the Shimla Agreement

The Shimla agreement of 1972 was more than just a peace treaty, it was the result of the India-Pakistan war of 1971 and sought to countermand the effect of such war. It practically wrecked the relations between India and Pakistan to be irreparable. The India Pakistan war of 1971, cost Pakistan to lose East Pakistan from West Pakistan and become an independent country now popularly known as Bangladesh. The war started as a result of Pakistan’s genocide over the Bengali population in East Pakistan. India lent support to the refugees of the genocide, India wanted to prevent Pakistan from entering India while liberating Dhaka.

Significance of Shimla as the venue for the agreement

The agreement was signed at the Barnes Court in Shimla, now the Raj Bhavan. The agreement was signed in such haste on the night of July 2nd, right after Bhutto made a declaration in a press conference that talks had failed. Shimla has been politically a very important city in the history of India’s struggle towards a sovereign state. Long before the Shimla Agreement, two other events made it so popular. Shimla Accord and the Shimla Convention.

The Shimla Accord then known as Simla witnessed the signing of an accord between India which was then a British colony, China, and Tibet on 3rd July 1914. The accord was for the to divide Tibet into inner and outer Tibet while China was to abstain from annexing outer Tibet. Between India and China, it was the introduction of the McMahone Line since both countries had disputes on un-demarcated borders.

The following event was the Simla Conference of 1945. The Conference was the reason for the Cabinet Mission Plan of 1946, it was the first step towards the possibility of an Independent India. Held on 25th and 26th June 1945 with 21 delegates. The agenda of the conference was to establish a provincial national government with the Executive council solely composed of Indians, governed by the Government of India Act of 1935. However, it failed due to the objections and tensions Mohamed Ali Jinnah had with the Congress and its nominating Muslims to the Executive council.

After which was the Shimla Agreement, a result of the Indo-Pak war of 1971.

Principles and objectives of the Shimla Agreement

Apart from these, there were comprehensive to the agreement meant for India and Pakistan as discussed below:

The accord contained the steps to be taken to ensure the normalisation of relations between India and Pakistan. The agreement was signed in Barnes Court (Raj Bhavan) at Shimla, Himachal Pradesh. The terms of the treaty were as follows:

India released 93,000 Pakistani prisoners of war (POWs) who were captured after the Bangladesh war.

Effect of the Agreement

There was no mention of the existence of such a meeting. Both India and Pakistan were busy focusing on their internal affairs and the promise made by Pakistan was never executed.

This Agreement determined the relations between both the countries. India faithfully observed the Shimla Agreement and abided by what was mutually agreed upon to improve the relations. Pakistan did not keep its word and continued to unsettle India on the Kashmir issue. There was a severe war-like situation between both countries around Kargil in 1999. Pakistani soldiers invaded Kargil in Jammu and Kashmir as well the lines of the Line of Control. A very critical war condition that lasted more than 60 days, until the involvement of the Indian Air Force drove Pakistani troops back to the territory. The effect of this war situation was yet another peace treaty, the Lahore declaration to maintain peace and stability.

The Agreement was looked down upon strategically by many and it was seen as a mistake from India’s point of view by Indira Gandhi. She was criticised widely for signing the Agreement without resolving the Kashmir issue. Pakistan claimed Kashmir so strongly that complications between India and Pakistan would have been inevitable. This was seen as another reason to criticise the signing of the Agreement by Indira Gandhi. It was called purposeless and impractical. Indira Gandhi could not use the victory of India in the 1971 war which was military surrender by Pakistan, to bring peace and stability amongst India and Pakistan.  Many addressed it as the treaty that was a mistake by Indira Gandhi since it backfired with the Kargil war situation of 1999 even after the surrender of POWs and territories by India. What was understood was that India had believed Pakistan was going to abide by the Agreement and demonstrate friendly conduct to foster peace and stability although Pakistan proved otherwise. Pakistan ought not to be underestimated since it has always been in a state of conflict over Jammu and Kashmir. India’s win in the Indo-Pak war of 1971 brought a lot of advantages to it, all that was lost by this agreement, perceived as false promises made by Bhutto. Pakistani leaders had a history of not keeping their word. India seemed to have missed the factor before signing the Agreement. The Agreement was criticised to have laughable expectations from Pakistan considering Bhutto never kept his word. Even if India returned territories it seized in the war and all the prisoners of war, the loss of the eastern part of Pakistan led to non-reconcilable relations between the countries.

India and Pakistan have always had a dispute with the determination of which country Kashmir belongs to. The Shimla Agreement, although signed in the name of the Bangladesh/East Pakistan dispute, ended directly at the Kashmir dispute. Many perceived the Agreement to have instigated Pakistan to make Kashmir its Bangladesh. The Indo-Pak war in 1971 resulted in the military surrender of Pakistan and the loss of East Pakistan as a territory that put India supposedly in a powerful position. This affected Pakistan, they began working on the strategy to pressurize India by targeting Kashmir. Pakistan did not want to lose Kashmir as well. Pakistan strongly claimed its right over Kashmir, but never directly confronted India, even after signing the Shimla agreement. Thus the Shimla agreement only pushed Pakistan towards claiming Kashmir as its own, making the dispute active all over again.

Relation between the Shimla and the Delhi Agreement

The Delhi Agreement was followed by the Shimla Agreement, signed in 1973. It was a trilateral agreement between Bangladesh, India, and Pakistan. The Agreement mainly focused on the repatriation of prisoners of war and civilians held in the three countries after the Bangladesh liberation war. Ratified by India and Pakistan only, although signed by all three countries. It was specifically required to repatriate Bengali bureaucrats and military personnel held up in West Pakistan to be moved to Bangladesh. India was to relocate 6,500 prisoners of war and military personnel while Bangladesh agreed to relocate mainly the Urdu-speaking Community of Pakistan. Pakistan did not properly settle the community in Pakistan after the Agreement due to which some of the prisoners of war were deserted and helpless.

Significance of the accord

Both countries made commitments to have a direct bilateral approach to resolve issues peacefully under the Simla Accord.

The agreement emphasised the importance of people-to-people contacts, which was meant to build a foundation of cooperative relations.

As per the agreement, both India and Pakistan had to take measures to not violate the Line of Control in Jammu and Kashmir to help maintain peace.

The Simla Agreement contained a set of guiding principles that both countries agreed to follow while managing relations with each other. The agreement emphasised on respect for each other’s territorial integrity and sovereignty, non-interference in the internal affairs of the other country, respect for the unity of both the countries, political independence, sovereign equality, and abjuring all hostile propaganda.

The Shimla Agreement and the subsequent Delhi Agreement gave Pakistan all it wanted: lost territories, soldiers and no trials for war crimes during and before the war. Sadly, India could not even negotiate the release of her own 54 POWs in Pakistani custody whose families continue to remain in despair.

There is an overwhelming perception that agreeing to the terms set by Pakistan was a huge strategic blunder. Also, the Indian Army was nowhere in the negotiation process. Both the agreements have not prevented the relationship between the two countries from deteriorating and has become a roller coaster ride with huge scope for a potential conflict under the nuclear umbrella.

The Shimla Agreement teaches a lot on the importance of bilateral agreements which seems to be the solution for the longest time for the conflicts between belligerent countries. The Shimla agreement is a perfect example of a bilateral agreement in the international purview but it is a failed agreement because it could not achieve any of India’s objectives fully, be it maintaining peace or resolving the Kashmir issues. If anything, it may have triggered the Pakistan army to claim Kashmir since they lost Bangladesh.