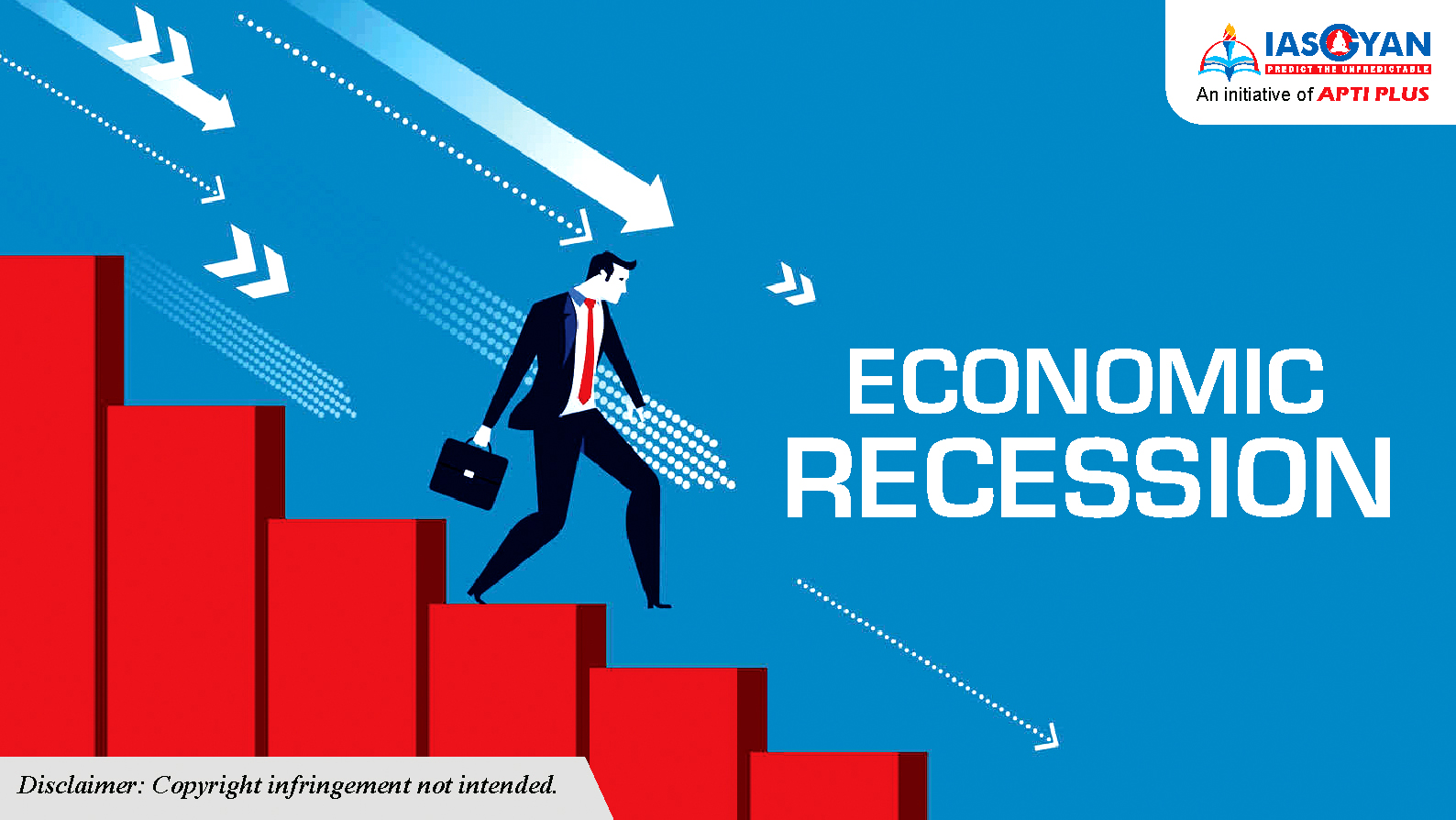 Economic recession is the phase where economic activity is stagnant, contraction in the business cycle, over-supply of goods compared to its demand, a higher rate of the jobless situation resulted in lower household savings and lower expense.

Government is unable to cope up certain economy and cumulation of inflation, higher interest rate, the higher commodity pieces, higher balance of payment and higher fiscal deficit that results in economic crisis.

A recession is when the GDP growth rate of a country is negative for two consecutive quarters or more. But a recession can be gauged even before the quarterly gross domestic product reports are out based on key economic indicators like manufacturing data, decline in incomes, employment levels etc.,

Thus, Recession is a slowdown or a massive contraction in economic activities. A significant fall in spending generally leads to a recession.

Such a slowdown in economic activities may last for some quarters thereby completely hampering the growth of an economy. In such a situation, economic indicators such as GDP, corporate profits, employments, etc., fall.

This creates a mess in the entire economy. To tackle the menace, economies generally react by loosening their monetary policies by infusing more money into the system, i.e., by increasing the money supply.

This is done by reducing the interest rates. Increased spending by the government and decreased taxation are also considered good answers for this problem. The recession which hit the globe in 2008 is the most recent example of a recession.

As per the nature of occurrence, recession can be classified into three categories, namely: –

It comes after the economic boom and are characterized by higher inflation, commodity prices, interest rates, etc.

It occurs when there is a drastic fall in business incomes, a fall in the firm’s asset value, and higher corporate borrowings.

It is a situation where there is prolonged stagnancy in economic activities, and the economy fails to revive despite several government interventions.

Below are some examples of economic recession: –

There was a drop in bank liquidity during 2008-2009 due to a fall in subprime lending in the USA. The recession was marked by the fall of the Lehman Brothers, one of the leading banks in the US. The credit growth was exponential for the banks and financial institutions

That resulted in limitless credit to the individuals. A person having earnings of $1,000 has been offered $10,000 worth of credit limit. As a result of the default, the credit provided by the banks became non-performing assets

During 2001, the GDP growth of the US fell by 0.3%. That was an example of a short-lived recession. The fall in the gross domestic product was primarily due to lower consumer sentiment due to the attacks of 9/11. However, these types of economic situations are not permanent. The recession continued for a span of a few months only. 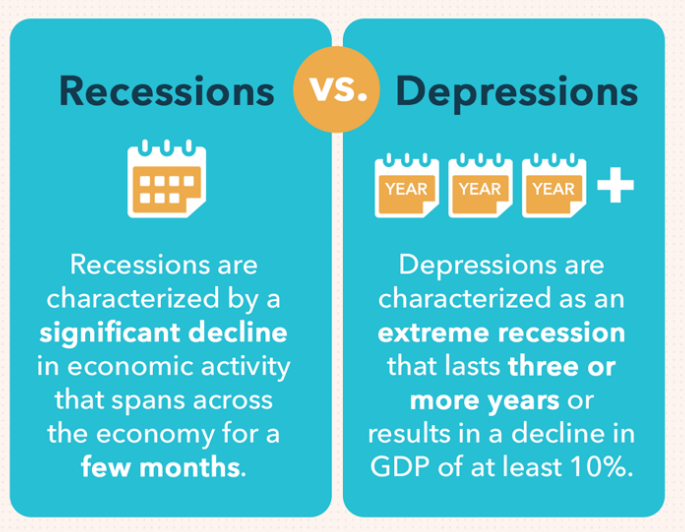 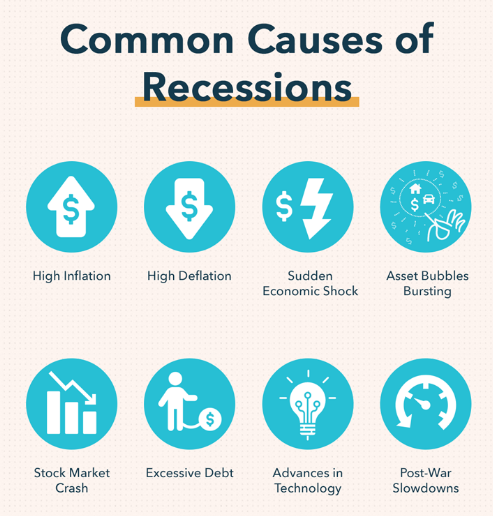 Why does recession occur?

Understanding the sources of recessions has been one of the enduring areas of research in economics. There are a variety of reasons recessions occur. Some are associated with sharp changes in the prices, which lead to steep drop in spending by both the private and public sectors.

Some recessions, like the 2008 global financial meltdown, are rooted in financial market problems. Sharp increases in asset prices and a rapid expansion of credit often coincide with accumulation of debt. As corporations and households get over-extended and face difficulties in meeting their debt obligations, they reduce investment and consumption, which in turn leads to a decrease in economic activity. Not all such credit booms end up in recessions, but when they do, these recessions are often more costly than others. In some countries with strong export sectors, recessions can be the result of a decline in external demand. Adverse effects of recessions in large countries—such as Germany, Japan, and the United States—are rapidly felt by their regional trading partners, especially during globally synchronized recessions.

Some recessions are also a result of global shocks like the current coronavirus-triggered lockdowns, which shut down economic activity in many countries.

Impact of a recession

One of the consequences of recession is unemployment, which tends to increase, especially among the low-skilled workers, due to companies and even government agencies laying off staff as a way of curtailing expenses. Another result of recession is drop in output and business closures. Fall in output tends to last until weaker companies are driven out of the market, then output picks up again among the surviving firms. With more people out of work, and families increasingly unable to make ends meet, there will be demands for increased government-funded social schemes. With drop in government revenues during recession, it becomes difficult to meet the increased demands on the social sector.

Here’s what you can expect to happen during a recession:

Unemployment Rises: One of the first things to occur during a recession is an increase in unemployment levels. This is because during recessions, businesses often have to cut spending, and employees are often one of the first expenses to be cut.

Less Spending: When employees are laid off, their income is obviously affected. With little or no income, consumers are less likely to spend, which puts less money into the economy and hurts businesses and stocks.

Government Debt Increases: With businesses laying off workers and those workers filing for unemployment, government debt grows as it tries to stabilize the economy with stimulus bills and aid.

Assets Lose Value: Many assets, especially stocks and homes, can lose their value, which can result in homebuyers and investors to lose money or even become bankrupt.

Interest Rates Drop: During recessions, the central bank typically slashes interest rates in an effort to stimulate the economy. This makes it more likely for businesses and consumers to take out loans and put more money into the economy to get it back on track.

Difficulty Finding Jobs: Widespread unemployment can saturate the job market as more and more people are out looking for jobs.

The most popular, or most recommended, policy for any country to dig itself out of recession is expansionary fiscal policy, or fiscal stimulus. This can be usually a two-pronged approach – tax sops and increased government spending. 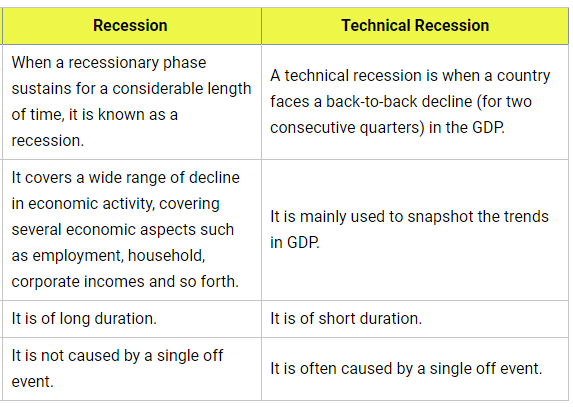 The supply across all the segments increases, and the overall demand for goods remains lower.