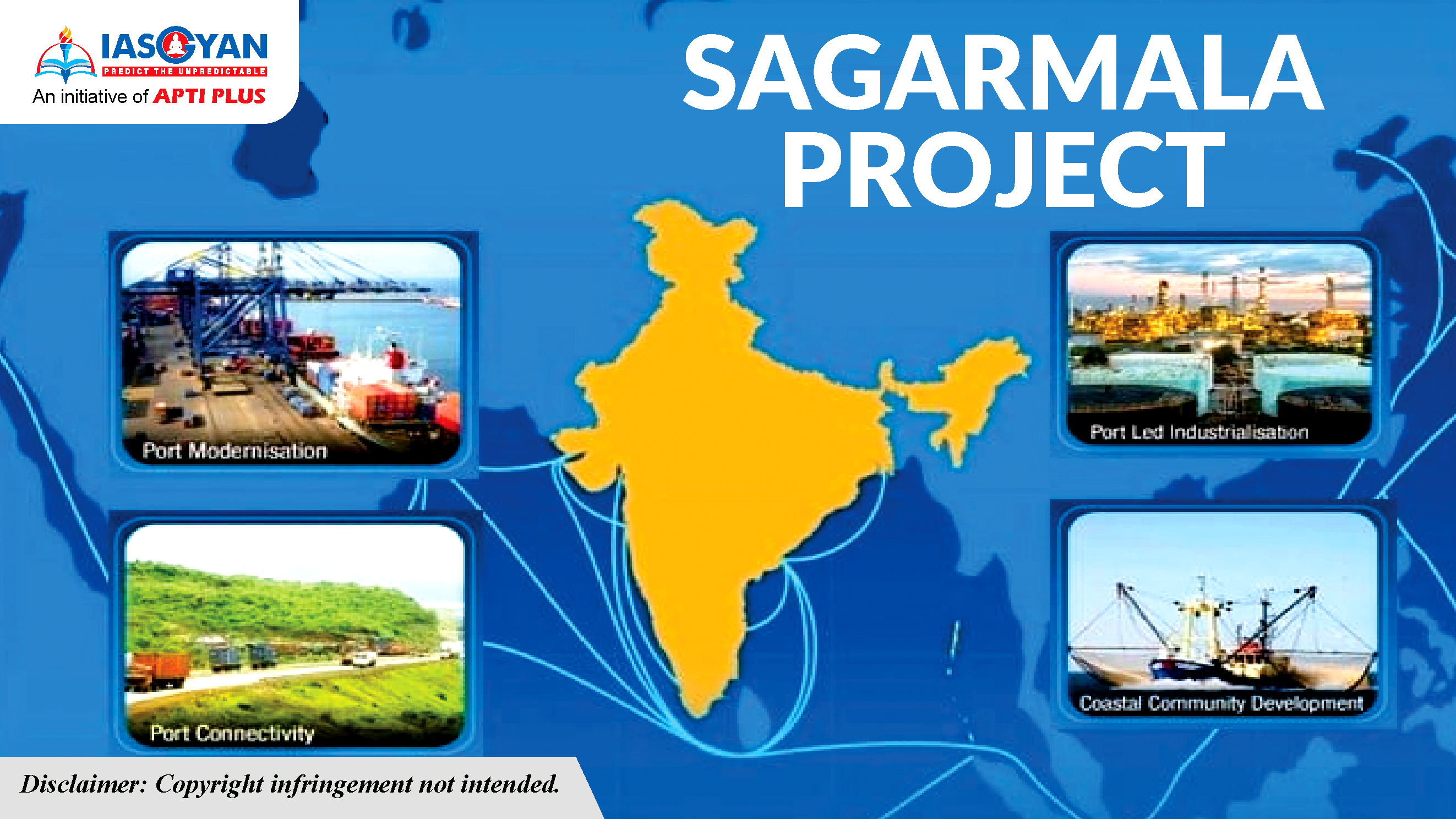 The Sagarmala Programme is a huge project taken up by the Indian government to improve the country’s logistic sector. This Pariyojana falls under the governance of the Ministry of Shipping of India.

India is a developing country with a GDP (Gross Domestic Product) growth rate of 7.3% (2018 to 2019). The Indian ports play a primary contributing role in this fast-growing economy. In fact, around 95% of merchandise trade passes through Indian seaports. However, the Indian ports still lag in multiple arenas when compared to international ports.

So, to finally do away with all the issues and develop it even further, the Ministry of Shipping decided to start a new program – The Sagarmala Project.

But, before we jump into the Sagarmala project details, let’s take a look at the 3 major downsides that the Indian ports face today.

Turnaround Time: The TAT (Turnaround Time) at primary ports for India is 2 and a half days. This exceeds by a gap of 24 hours compared to the global average time of only 1 to 1.5 days.

Lack of Connectivity: Ports along the Indian coastline are not well-connected because of which it takes more time for cargo to reach their destination. This further leads to congestion on the sea routes contributing to more delays, slowing down the entire process. And, while roads and railways are always a viable alternative for goods transportation, it increases the logistics cost and the price of the commodities.

Using a better interlinking for cargos via inland waterways will reduce transportation costs and the price of industrial commodities such as coal, iron ores, cement, steel, etc.

The primary aim of the Sagarmala Initiative are as follows:

Why is the Sagarmala Project So Crucial for India?

At present, the GDP (Gross Domestic Product) of India is only 42%. However, the GDP of countries like Europe and Germany is 70% and 75%. It shows that India lags in many aspects, especially in terms of logistics and port infrastructure. The most shocking fact is that India has only 1% of the ports share.

Therefore, the Indian Ministry of Shipping takes the initiative of creating ports to increase the Indian economy and business ventures. This initiative is the Sagarmala Project.

Here are the elaborative reasons why the Sagarmala Scheme is critical for India.

Which Zones under CEZ are proposed in the Sagarmala Programme?

Here is the list of the 14 Coastal Economic Zones under the Sagarmala Programme: 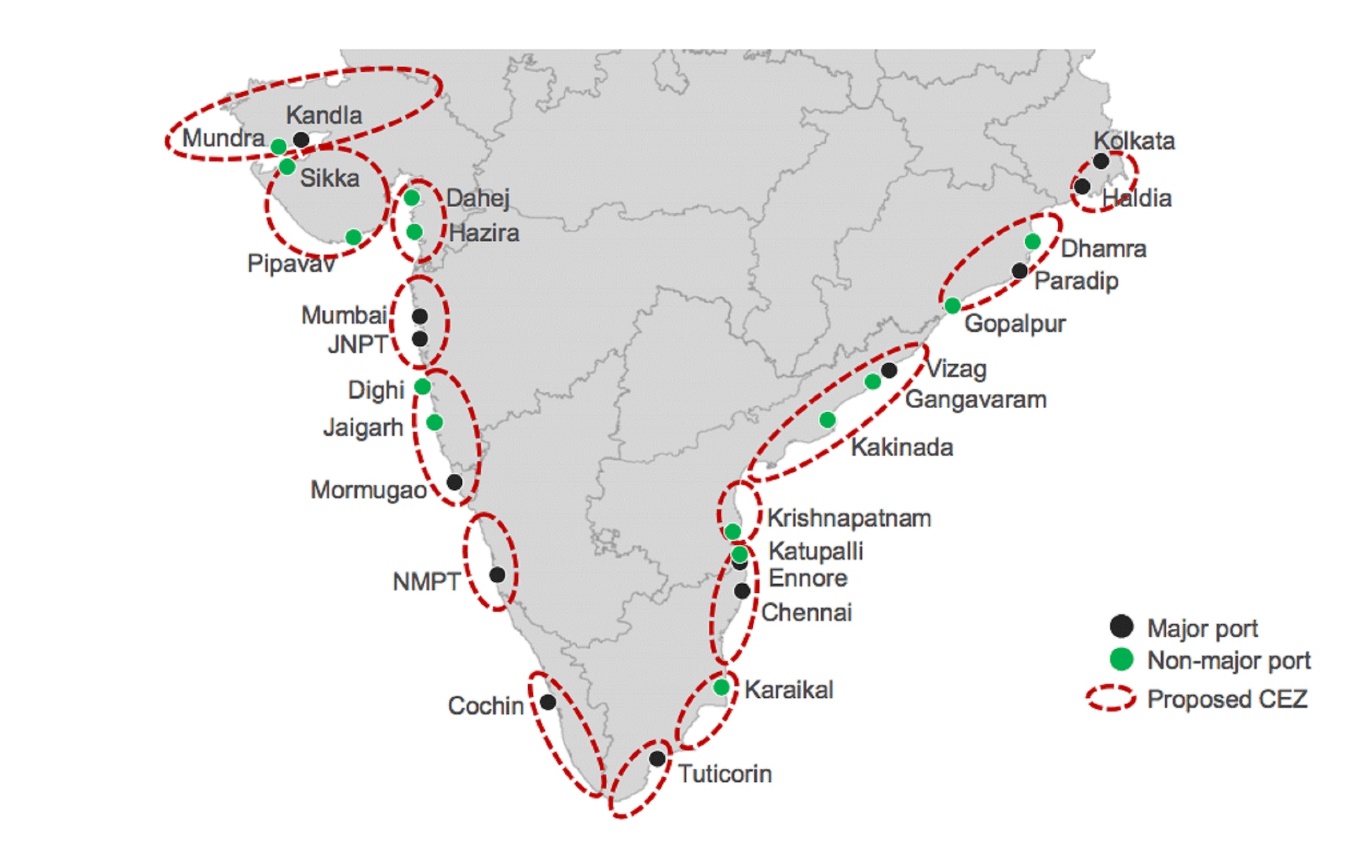 Other Coastal Developments by GOI under Sagarmala Project

According to the reports, around 18% of Indians live in the 72 districts near the coastal region. Further, these districts consist of 12% of the mainland Indian population.

The coastal developments by GOI (Government of India) involve activities like fisheries, maritime tourism, skill development for local people, among others under the Sagar Mala Project.

Additionally, the development of cruise tourism is also a substantial operation taken up to increase employment opportunities and overall growth.

Under the Sagarmala Programme, the Central Ministries and State Governments will collect funds and use them for providing infrastructure facilities, social developmental projects, fisheries business, aquaculture, cold chain development, and more under their governance.

Under Sagarmala Pariyojna, the Ministry of Tourism and the developmental tourism departments are promoting marine tourism. Here are the following projects they have started working on:

Under the Sagarmala Scheme, the ministries use an integrated approach to improve the quality of life of all people living near coastal areas. Skill improvement and training are being provided to the people so that they can earn an adequate earning. The plan is to train and make them efficient enough so that they can easily work with the developmental project of Sagarmala.

The Sagar Mala Project has the ability to make India’s GDP skyrocket with intense and streamlined port operations and coastal community development. It has already provided growth, employment, and basic necessities for people living in 72 districts across the coastal region.

It is estimated that all targets under the Sagarmala Project will be fulfilled by 2035. With the Programme moving rapidly every day, the government has been hugely successful in achieving its target so far, and we have complete trust in its abilities, strength, and power.