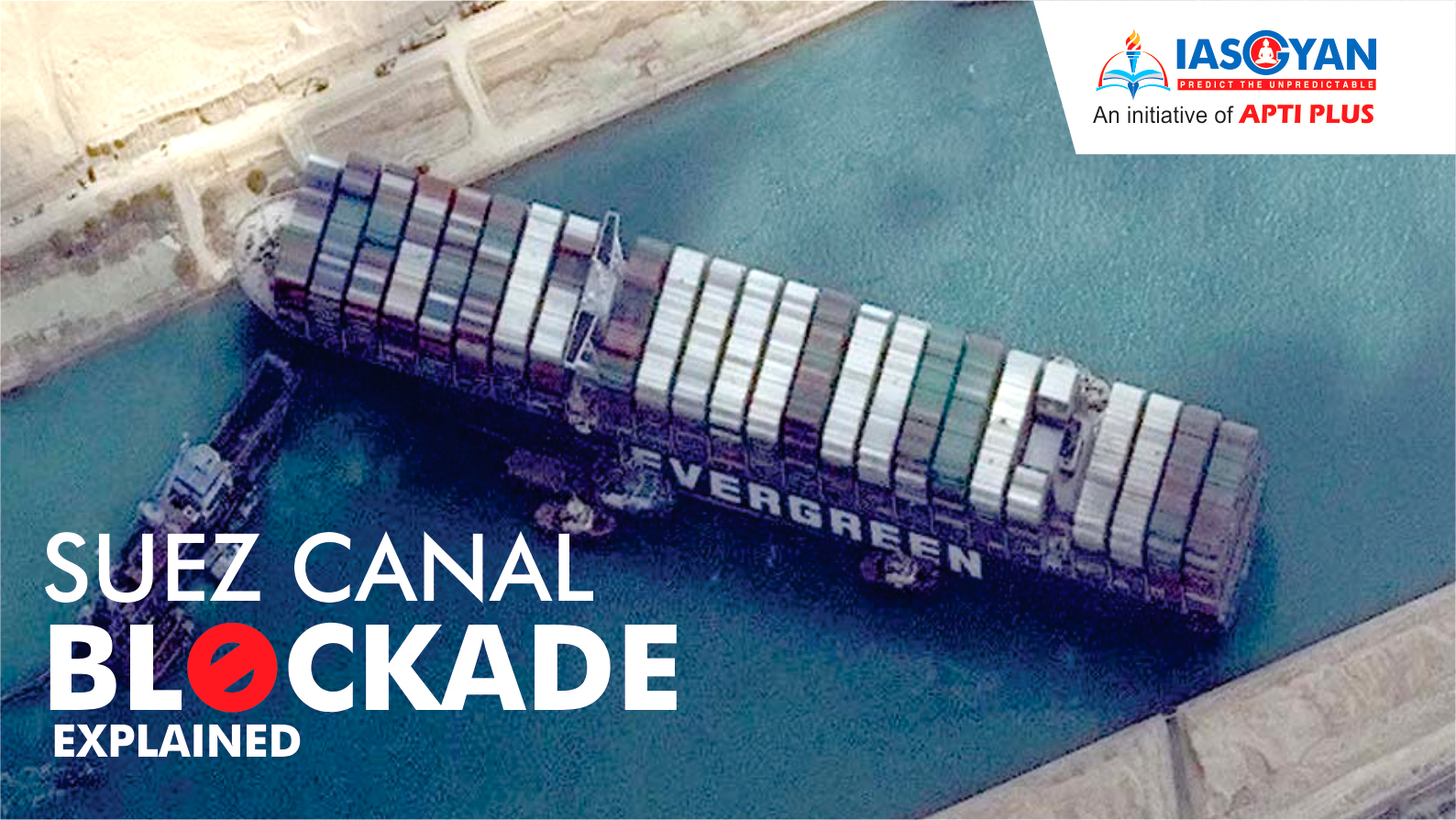 Recently, the Suez Canal in Egypt got blocked by a large cargo ship called the MV Ever Given. Traffic has resumed in Suez Canal after a stranded container ship blocking it for nearly a week was finally freed by salvage crews.

The Suez Canal is an artificial sea-level waterway in Egypt, connecting the Mediterranean Sea to the Red Sea through the Isthmus of Suez and dividing Africa and Asia.

The Canal provides the shortest maritime route between Europe and the lands lying around the Indian and western Pacific oceans.

It reduces the journey distance from the Arabian Sea to London by approximately 8,900 kilometers or 8 days.

A Brief History of the Canal

In 1858, the Universal Suez Ship Canal Company was tasked to construct and operate the canal for 99 years. The French and British held most of the shares in the canal company. It was decided that after 99 years rights would be handed to the Egyptian government. Despite facing multiple problems ranging from financial difficulties and attempts by the British and Turks to halt construction, the canal was opened for international navigation in 1869.

In 1888 the major maritime powers at the time (except Great Britain) signed the Convention of Constantinople, which declared that the canal should be open to ships of all nations in times of both peace and war. In addition, the convention forbade acts of hostility in the waters of the canal and the construction of fortifications on its banks. Great Britain signed the convention only after 1904.

The British powers that controlled the canal through the first two world wars withdrew forces there in 1956 after years of negotiations with Egypt, effectively relinquishing authority to the Egyptian government.

History of International Use

The history of international use of the canal during wartime includes

Theoretically, the canal was open to all belligerents during World Wars I and II, but the naval and military superiority of the Allied forces denied effective use of the canal to the shipping of Axis Powers (Germany and its allies).

Course of the Canal

The canal extends 193 km between Port Said in the north and Suez in the south. The canal utilizes several lakes: from north to south, Lake Manzala, Lake Timsah , and the Bitter Lakes—Great Bitter Lake  and Little Bitter Lake. 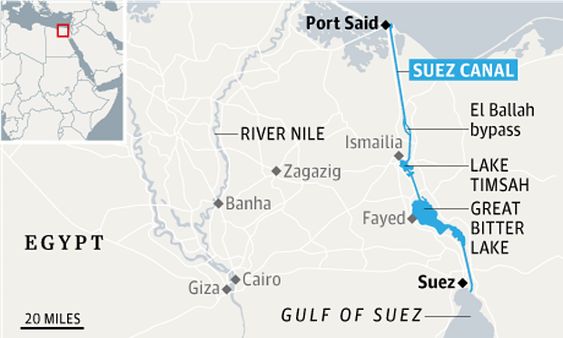 The Suez Canal is an open cut, without locks, and, though extensive straight lengths occur, there are eight major bends.

To the west of the canal is the low-lying delta of the Nile River and to the east is the higher, rugged, and arid Sinai Peninsula. 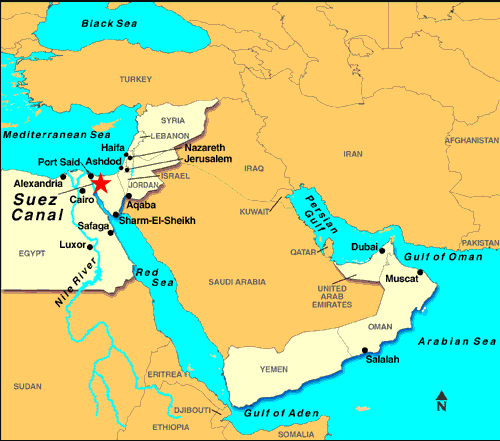 Significance of the Suez Canal

World Trade: About 12% of world trade passes through the canal each year, everything from crude oil to grains to instant coffee. Without Suez, a supertanker carrying Mideast crude oil to Europe would have to travel an extra 6,000 miles around Africa’s Cape of Good Hope. Because it has no locks, it can even handle aircraft carriers.

Importance of the Suez Canal to India

There are many reasons why India considers the Suez Canal to be of great importance. The following are some of the major important roles that this waterway plays in India’s economy: 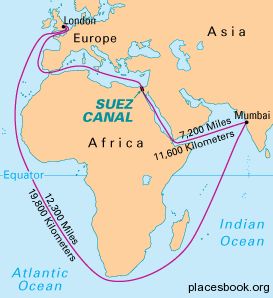 The construction of the Suez Canal reduced the distance between India and Europe significantly. Without the Suez Canal, Indian ships would have to go around the Cape of Good Hope - Southern tip of Africa and all the way up the west coast of Africa - a much longer and expensive route. The distance between Mumbai and London is roughly 7,200 nautical miles using the Suez Canal and 12,300 nautical miles taking the longer route around the Cape of Good Hope. The reduced distance has led to faster transportation of Indian products saving an estimated 15 days of journey time on average.

Prior to the construction of the Suez Canal, India had to transport its goods to Europe using the Cape of Good Hope. This was a much longer route and was a major hindrance to the trade between Europe and India. However, with the Suez Canal, trade flows increased greatly especially on oil imports by Europe and Asia.

In 2016, 3.9 million billion dollars of oil (crude oil and refined products) transited the Suez Canal in both directions.

For India, one of the major benefits of using the Suez Canal in transporting goods is because it is a secure route. The canal experiences less piracy activities as compared to the other routes like:

The canal has more security and personnel as compared to the other trade routes.

Impact on Global Supply Chains due to the recent blockade

The cargo ship blocking the Suez Canal is holding up traffic that carries nearly $10 billion worth of goods every day.

About 10% of all global trade flows through the 193-kilometer-long canal, which allows tankers and container ships to avoid a long trip around the southern tip of Africa.

Raw Materials: The blockage delayed a range of parts and raw materials for European products such as cotton from India for clothes, petroleum from the Middle East for plastics, and auto parts from China.

Oil and Natural Gas:  About 1.9 million barrels of oil a day go through the canal. That’s about 7% of all seaborne oil. Tankers using the Suez carry 8% to 10% of the world’s liquefied natural gas. The closure affected shipments of oil and natural gas from the Mideast to Europe.

Gasoline: 1.4 million barrels of gasoline and other refined products flow from the Middle East and Asia north through the canal to Europe on an average day. The blockade had a major impact on the supply chains.

The Suez Canal has seen worse blockages - some of which have lasted for years.

According to the Suez Canal Authority, which maintains and operates the waterway, the Suez Canal has closed five times since it opened for navigation in 1869.

The current closure was expensive for global trade — the shipping industry and insurance companies — and it is estimated that the loss per hour is almost $400 million.

This aspect points to the fragility of global trade. The worldwide logistics management chain has acquired a high degree of efficiency -- by way of manufacturing goods to tight schedules and keeping inventory/warehouse/shipping costs to the bare minimum. But even while ensuring timely delivery to the customer, an unforeseen accident such as the Suez closure can lead to a cascading downstream disruption of trade with attendant economic consequences.

The Suez along, with the Panama (that links the Pacific and Atlantic oceans), are the two most critical canals in the global maritime domain along with the Volga-Don and the Grand Canal (China). Each canal has its own navigational challenges and protocols.

Given the scale of the consequences — both fiscal and supply-chain disruption — the need to objectively review existing procedures and protocols specific to the Suez merits the highest priority.