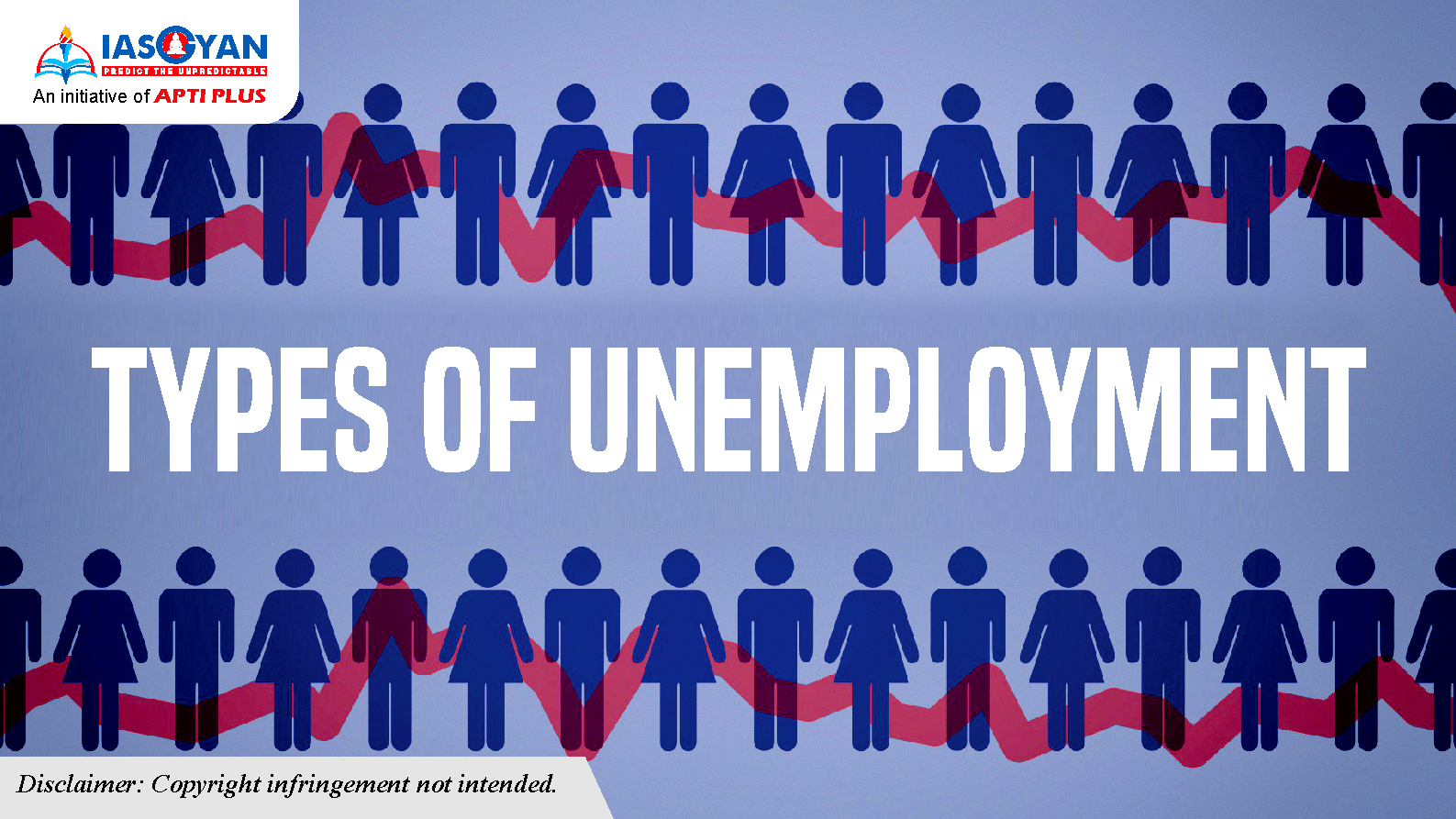 Unemployment in a country is a state in which there are many workable people in the country, they are ready to work at the current rate of wages but they are not getting work due to many reasons. When estimating unemployment only those individuals are counted who:

Types of Unemployment in India

Open unemployment is a situation where in a large section of the labour force does not get a job that may yield them regular income. This type of unemployment can be seen and counted in terms of the number of unemployed persons. The labour force expands at a faster rate than the growth rate of economy. Therefore all people do not get jobs.

It is a situation in which more people are doing work than actually required. Even if some are withdrawn, production does not suffer. In other words it refers to a situation of employment with surplus manpower in which some workers have zero marginal productivity. So their removal will not affect the volume of total production. Overcrowding in agriculture due to rapid growth of population and lack of alternative job opportunities may be cited as the main reasons for disguised unemployment in India.

It is unemployment that occurs during certain seasons of the year. In some industries and occupations like agriculture, holiday resorts, ice factories etc., production activities take place only in some seasons. So they offer employment for only a certain period of time in a year. People engaged in such type of activities may remain unemployed during the off-season.

It is caused by trade cycles at regular intervals. Generally capitalist economies are subject to trade cycles. The down swing in business activities results in unemployment. Cyclical unemployment is normally a shot-run phenomenon.

Among the educated people, apart from open unemployment, many are underemployed because their qualification does not match the job. Faulty education system, mass output, preference for white collar jobs, lack of employable skills and dwindling formal salaried jobs are mainly responsible for unemployment among educated youths in India. Educated unemployment may be either open or underemployment.

It is the result of certain changes in the techniques of production which may not warrant much labour. Modern technology being capital intensive requires fewer labourers and contributes to this kind of unemployment.

This type of unemployment arises due to drastic changes in the economic structure of a country. These changes may affect either the supply of a factor or demand for a factor of production. Structural employment is a natural outcome of economic development and technological advancement and innovation that are taking place rapidly all over the world in every sphere.

It is a situation in which people employed contribute less than their capacity to production. In this type of unemployment people are not gainfully employed. They may be employed either on part-time basis, or undertake a job for which lesser qualification is required. For example a Post Graduate may work as a clerk for which only S.S.L.C. is enough.

When a person is employed on a day-to-day basis, casual unemployment may occur due to short-term contracts, shortage of raw materials, fall in demand, change of ownership etc.

Frictional unemployment is caused due to improper adjustment between supply of labour and demand for labour. This type of unemployment is due to immobility of labour, lack of correct and timely information, seasonal nature of work etc.