What is the syllabus and exam pattern of mains?

essay type out of which two papers will be of qualifying in nature. Marks obtained for all the

compulsory papers (Paper-I to Paper-VII) and Marks obtained in Interview/Personality Test will be counted for ranking. 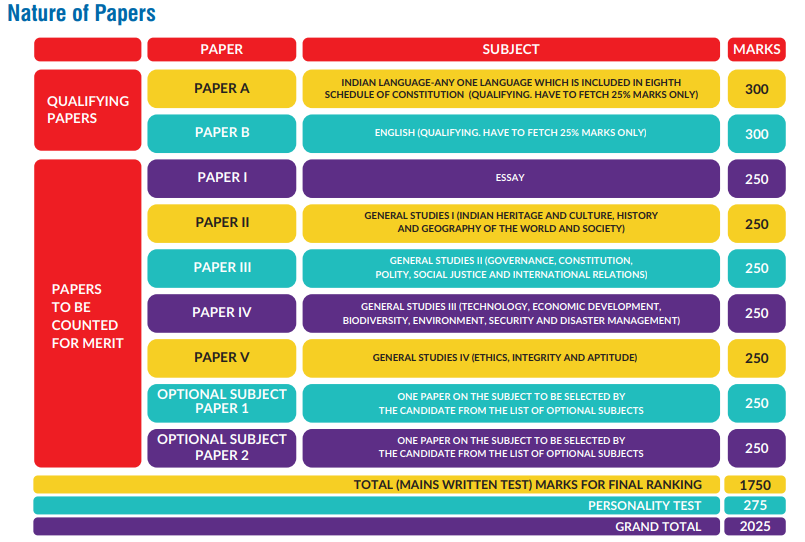 (i) The papers on Indian languages and English (Paper A and paper B) will be of Matriculation or equivalent standard and will be of qualifying nature. The marks obtained in these papers will not be counted for ranking.

(ii) Evaluation of the papers, namely, 'Essay', 'General Studies' and Optional Subject of all the candidates would be done simultaneously along with evaluation of their qualifying papers on ‘Indian Languages’ and ‘English’ but the papers on Éssay', General Studies and Optional Subject of only such candidates will be taken cognizance who attain 25% marks in ‘Indian Language’ and 25% in English as minimum qualifying standards in these qualifying papers.

(iii) The paper A on Indian Language will not, however, be compulsory for candidates hailing

from the States of Arunachal Pradesh, Manipur, Meghalya, Mizoram, Nagaland and Sikkim.

(iv) The paper A on Indian Language will not, however, be compulsory for Candidates belonging to Persons with Benchmark Disability (only Hearing Impairment sub-category) provided that they have been granted such exemption from 2nd or 3rd language courses by the concerned education Board/University. The candidate needs to provide an undertaking/self-declaration in this regard in order to claim such an exemption to the Commission.

(v) Marks obtained by the candidates for the Paper I-VII only will be counted for merit ranking. However, the Commission will have the discretion to fix qualifying marks in any or all of these papers.

(vi) For the Language medium/literature of languages, the scripts to be used by the candidates will be as under

(xxvi) Literature of any one of the following languages:

(i) The question papers for the examination will be of conventional (essay) type.

(ii) Each paper will be of three hours duration.

(iii) Candidates will have the option to answer all the question papers, except the Qualifying

(iv) Candidates exercising the option to answer Papers in any one of the languages included in the Eight Schedule to the Constitution of India mentioned above may, if they so desire, give English version within brackets of only the description of the technical terms, if any, in addition to the version in the language opted by them. Candidates should, however, note that if they misuse the above rule, a deduction will be made on this account from the total marks otherwise accruing to them and in extreme cases; their script(s) will not be valued for being in an unauthorized medium.

(v) Candidates should note that if any irrelevant matter/signages/marks etc. are found written in the answer script(s), which would not be related to any question/answer and/or would be having the potential to disclose the candidate’s identity, the Commission will impose a penalty of deduction of marks from the total marks otherwise accruing to the candidate or will not evaluate the said script(s) on this account.

(vi) The question papers (other than the literature of language papers) will be set in Hindi and English only.

The main Examination is intended to assess the overall intellectual traits and depth of understanding of candidates rather than merely the range of their information and memory.

be such that a well-educated person will be able to answer them without any specialized study. The questions will be such as to test a candidate’s general awareness of a variety of subjects, which will have relevance for a career in Civil Services. The questions are likely to test the candidate’s basic understanding of all relevant issues, and ability to analyze, and take a view on conflicting socio-economic goals, objectives and demands. The candidates must give relevant, meaningful and succinct answers.

Syllabi of the papers included in the scheme of Civil Services (Main) Examination are given as follows:

The aim of the paper is to test the candidates' ability to read and understand serious discursive prose, and to express ideas clearly and correctly, in English and Indian language concerned.

The pattern of questions would be broadly as follows:

(i) Comprehension of given passages.

(i) comprehension of given passages.

(v) Translation from English to the Indian Language and vice-versa.

Note 1: The papers on Indian Languages and English will be of Matriculation or equivalent standard and will be of qualifying nature only. The marks obtained in these papers will not be counted for ranking.

Note 2: The candidates will have to answer the English and Indian Languages papers in English and the respective Indian language (except where translation is involved).

Essay: Candidates may be required to write essays on multiple topics. They will be expected to keep closely to the subject of the essay to arrange their ideas in orderly fashion, and to write

concisely. Credit will be given for effective and exact expression.

General Studies‐I: Indian Heritage and Culture, History and Geography of the World and Society.

This paper will include questions to test the candidates’ attitude and approach to issues relating to integrity, probity in public life and his problem solving approach to various issues and conflicts faced by him in dealing with society. Questions may utilise the case study approach to determine these aspects.

The following broad areas will be covered: