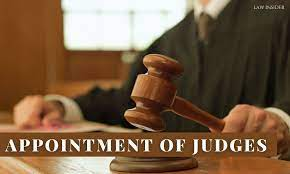 Context - The Union Government has notified the appointment of 8 new High Court judges.