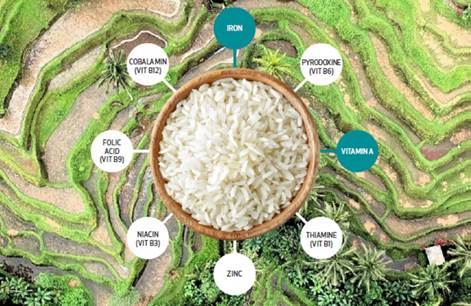 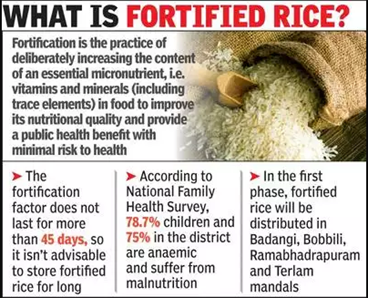 What is the need for Fortification in India? 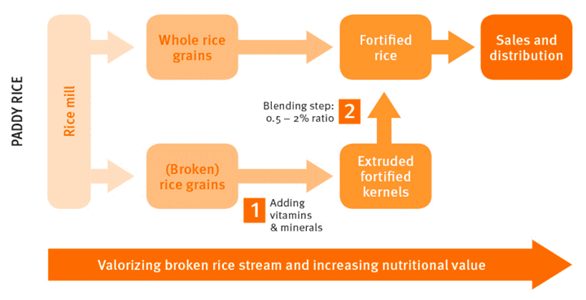 Does fortified rice have to be cooked differently?

How can a beneficiary distinguish between fortified rice and regular rice?

Report by ASHA-Kisan Swaraj and the Right to Food Campaign, Jharkhand

Highlights of the Report:

Regulatory requirement for the level of iron in fortified rice:

Reduction of the diversity of rice grains:

Case Study: "Farming System for Nutrition" in Koraput and Wardha

Recently, researchers from the MS Swaminathan Foundation, ICAR and the Borlaug Institute for South Asia, reported on an approach that was designed with community inputs in Koraput and Wardha. They aimed to increase the availability of nutrient-dense cereals and pulses by on-farm crop interventions, promotion of nutrition gardens with nutrient-rich fruits and vegetables, increasing access to animal food sources through fishery and poultry, and nutrition awareness.

They even aimed to introduce new vegetables into the horticultural space, like the Orange-Fleshed Sweet Potato. This was the "Farming System for Nutrition", as envisioned by the MS Swaminathan Foundation: note the simplicity in the approach.

They describe how this approach, over three years, was able to quantitatively improve by up to two-fold, the intake of diverse high-quality foods in households of Koraput and Wardha. Indeed, the improved diet was able to meet greater than 90 per cent of most micronutrient requirements. This was all with community involvement and ownership, with no need for global technological solution.

Technology and 'scaling up' is in direct contrast to diversity and local, community owned methods.

"Farming System for Nutrition" in Koraput and Wardha is a testimony to the fact that we can improve diet diversity by community level agriculture, horticulture and animal husbandry.