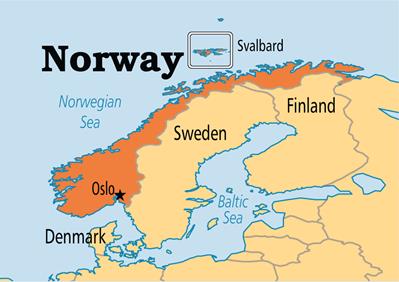 Context: Recently, Norway’s Ambassador to India has reported that the bilateral trade between India and Norway has doubled to $2 billion in the last two years.

Democracy and a rules-based world order

Norway and India both prioritise stability and predictability. Norway seeks to cooperate with India to strengthen the multilateral governance systems, the international trading system and the international legal order, not least regarding the oceans.

Norway and India are both ocean nations seeking to develop the vast economic, scientific and ecological potential of the oceans. In 2019, Norway and India signed a Memorandum of Understanding (MoU) establishing a structured and strategic cooperation on the oceans.

The Indo-Norwegian cooperation on energy aims to develop energy sources that power economic growth, alleviate poverty, and foster peace and prosperity. Promoting access to clean and sustainable energy while combating climate change is a key concern for both countries. Norway is eager to work with India to achieve the Indian government’s ambitious targets for its transition to a green economy.

Norway considers India a critical partner in addressing global climate, environment and resource challenges, and continuously seeks to increase cooperation in support of the Paris agreement and the SDG-agenda.

India is also one of six priority countries identified by Norway for cooperation on higher education and research in the Panorama strategy (Strategy for cooperation on higher education and research with Brazil, China, India, Japan, Russia and South Africa (2016–2020)). At the heart of this cooperation are thematic areas relating to the oceans, such as climate change, the environment, marine research, the maritime sector and polar research.

India is also a central theme in the Research Council of Norway’s domestic program on international relations, foreign policy and Norwegian interests (UTENRIKS) under the focus area ‘Asia in transition’.

Since 2006, Norway has collaborated with India on the development of innovative models for improving maternal and child health

In 2019, an agreement to establish an Indo-Norwegian Dialogue on Trade and Investments was signed between our two countries. Norwegian investment interests in India are increasing, in particular in ocean related areas. As of 2019, more than 100 Norwegian companies have established themselves in India. Another 50 are represented by agents. The Norwegian Pension Fund Global is likely one of India’s largest single foreign investors. In 2019, its investments amounted to USD 9.5 billion.

The Norwegian Business Association (India) (NBAI) was established in 2013. It aims to promote bilateral relationships and promote business in general between India and Norway.