The Amendment Regulations are effective from 14th June, 2022.

What do we mean by Insolvency?

What does the IBC aim to do?

Key Objectives of the Code

Applicability of the Code

The provisions of the Code shall apply for insolvency, liquidation, voluntary liquidation or bankruptcy of the following entities:- 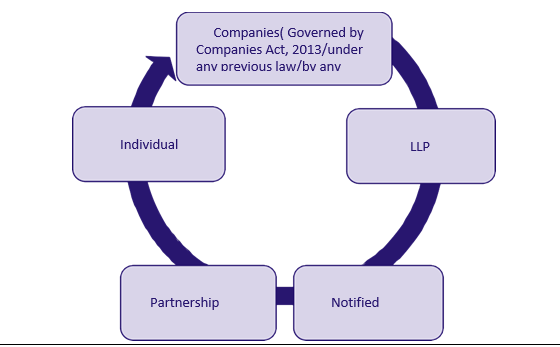 The Code creates various institutions to facilitate resolution of insolvency. These are as follows:

Few Important Definitions under the Code for Corporate Insolvency

Pillars of Insolvency and Bankruptcy Code, 2016

Insolvency and Bankruptcy Board of Republic of India

The implementation and operation of the board come under the body Insolvency and Bankruptcy Board of Republic of India. It is created by the IBC as a restrictive yet superior body. The matters with respect to IBC are handled by this board and control, not just the profession but also the processes. The board plays a pivotal role for implying the code which amends laws of conversion of insolvent companies.

The proceedings concerning this code under insolvency law come under the NCLT, which is the adjudicating authority. This authority functions as a forum that undertakes the resolution of the insolvency cases. An appeal under the NCLT can be quashed, or a stay can be initiated against that order. NCLAT is the place where the appeals can be made under NCLT. The appeal against the order of NCLAT can be made in the Supreme Court, which is the highest court of authority.

With the information utilities under the IBC, 2016, gathering and passing the information from creditors to corporate was made possible. Currently, the financial data of creditors can be obtained from the income tax department only. 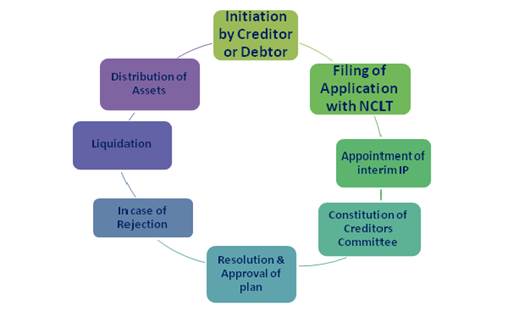 What is the timeframe for completion of the exercise under the Code?

Who regulates the IBC proceedings?

Who facilitates the insolvency resolution?

Who adjudicates over the proceedings?

What is the procedure to resolve insolvency under the Code?

What does the committee of creditors do?

What happens under liquidation? 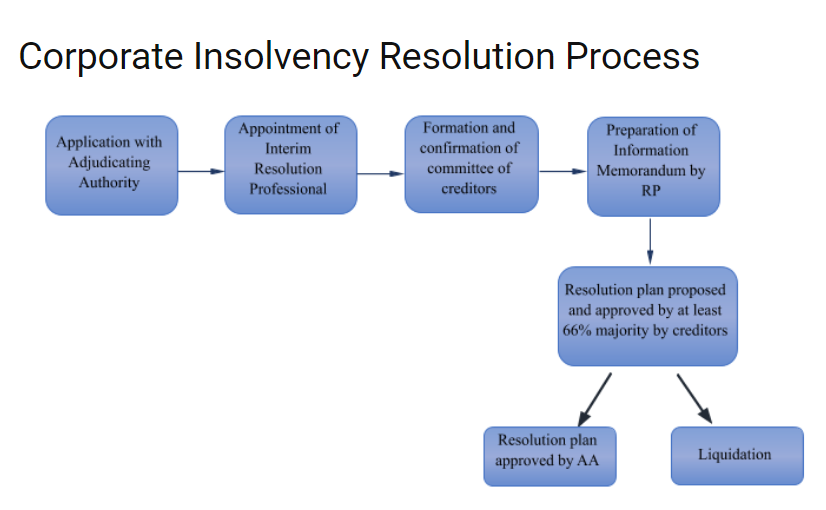 TIMELINE (AS STIPULATED IN THE CODE)

The simplified outline of the corporate insolvency resolution process under the Insolvency and Bankruptcy Code, 2016 is as below:

Either the borrower / the lender approach the adjudicating authority which is the NATIONAL COMPANY LAW TRIBUNAL (NCLT – in case of Company’s & LLP’s) or the Debt Recovery Tribunal (DRT – in case of individuals or partnership firms) for initiating the resolution process.

An Interim Insolvency Professional will be appointed by the Creditors to take control of the debtor’s assets and company’s operations, collect financial information of the debtor from the information utilities, ascertain the claim and to constitute a creditor’s committee.

Every item that requires the approval of the creditors in their committee meeting needs to be passed with a voting share percentage of 75%.

Upon passing of the resolution by the creditors committee, the committee shall decide on the restructuring process that could either be a revised repayment plan for the company or liquidation of the assets of the company. If no such decision is taken by the creditors in their meeting then, the debtor’s assets will be liquidated to repay the debt. 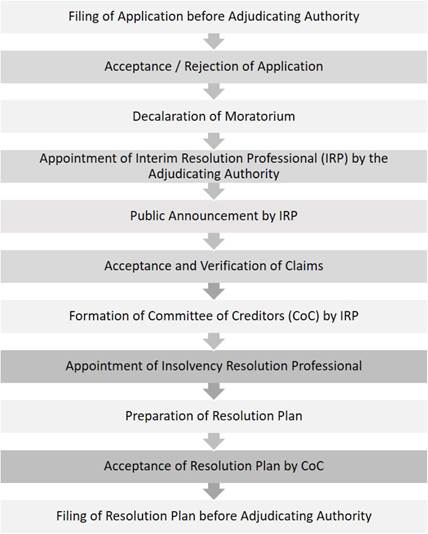 The IBC successfully remedies several shortcomings of the earlier insolvency resolution process, such as

Achievements of Insolvency and Bankruptcy Code

Non-execution of the process in set time frame

Lack of coordination between parties involved

The reasons for such clogging are obvious:

How are pre-packs better than CIRP?