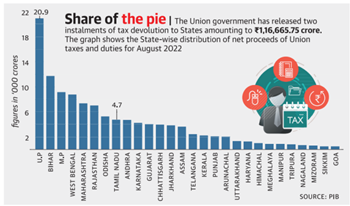 Financial Relations between Union and State

Grants-in-Aid to the States: The Constitution provides for grants-in-aid to the states from Central resources in addition to revenue sharing between the Centre and the states. Statutory grants and discretionary grants are the two forms of grants-in-aid:

Borrowing by the Centre and the States