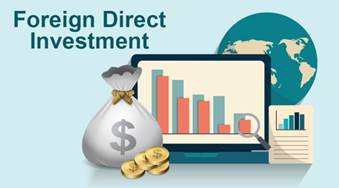 Where is FDI made?

Routes through which India gets FDI

Sectors which come under the ' 100% Automatic Route' category are

Sectors which come under up to 100% Automatic Route' category are

There are a few industries where FDI is strictly prohibited under any route. These industries are

Status of FDI flows into India 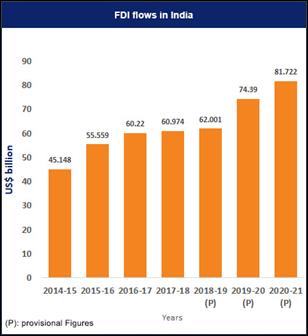 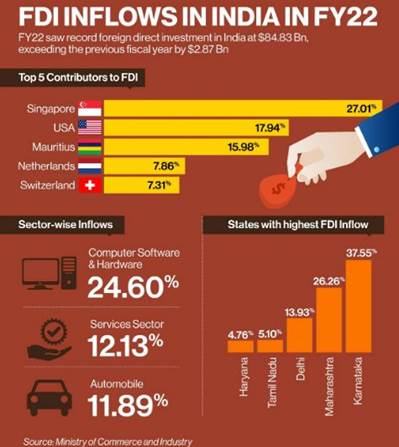 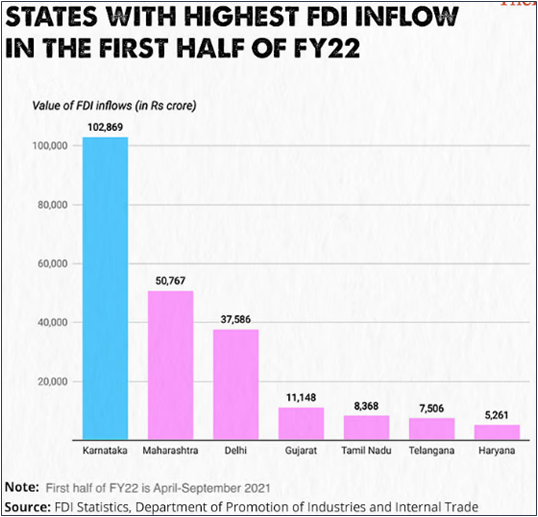 One District One Product (ODOP)

The Pros and Cons of FDI

Promotion of investment in key areas

By allowing FDI, we can promote investment in key areas such as infrastructure development as a result of which there will be more production of capital goods. For example, investment in power generation can generate more electric power which will enable the growth of more industries.

FDI promotes more capital inflow into the country especially in key and core sectors. We have a shortage of capital not only in the form of money but also in the form of material. FDIs will bridge this gap by which there will be speedy economic growth in the country.

With the help of FDI, the exports of many underdeveloped countries have increased. The creation of Economic Zones and promotion of 100% export oriented units have helped FDIs in increasing their exports from other countries. Certain consumer products produced by them have world-wide markets. There is a change in the composition of exports and direction of exports with the presence of FDI.

FDI can stimulate a target country’s economic development and create a more conducive environment for companies, the investor, and stimulate the local community and economy.

Countries usually have their own import tariffs, which makes trading rather difficult. A lot of economic sectors usually require presence in the international makerts to ensure sales and goals are met. FDI makes all of these international trade aspects a lot easier.

FDI creates new jobs and more opportunities as investors build new companies in foreign countries. This can lead to an increase in income and mor purchasing power to locals, which in turn leads to an overall boost in targetted economies.

FDI strengthens financial services of a country by not only entering its banking industry but also by extending other activities such as merchant banking, portfolio investment, etc., which has resulted in the promotion of more new companies. It has also helped the capital market in the country.

Reserve Bank of India has been maintaining the exchange rate in the country through its exchange control measures. But the constant and continuous supply of foreign exchange is a must for continuing exchange rate stability. With more FDIs coming into the country, this is made possible and today RBI is having a comfortable foreign exchange reserve position of more than 1 billion dollars.

Foreign direct investments are in a way responsible for the development of backward areas. There are so many industries started by them in far reaching and backward areas, as a result of which these areas have developed into industrial centres. Some of the backward regions have utilized the services of FDIs for starting industries in backward areas. Examples are Hyundai and Ford car units started at Sriperumbadur and Maraimalainagar in India.

The natural resources in the country is put to better use by the FDls which otherwise would have remained un utilised. The examples are Saint Gobain glass company and manufacture of paper and newsprint.

Change in the lifestyle of people

The presence of FDIs has no doubt changed the life-style pattern of people. The purchase of consumer goods such as TV, fridge, automobiles are made possible as these goods are made available through hire purchase system. The increasing number of automobiles in most of the cities is a standing example for the change in the life-style.

Foreign investors receive tax incentives that are very beneficial regardless of your selected field of business. Everybody loves a tax write-off.

The development of human capital resources is a big advantage of FDI. The skills gained by the workforce through training increase the overall education and human capital within a country. Countries with FDI are benefiting by developing their human resources all while maintaining ownership.

Foreign direct investment allows for resource transfers and the exchanges of knowledge, technologies, and skills.

It will Improve Competition and Bring Prices Down

Trade in India is majorly fragmented, unorganized, un-networked, inefficient and individually small. The manifestation of the inefficiencies is visible in the huge disparity between the price which the producer gets and the price which the consumer pays— sometimes as high as 10-20 times! Clearly, what is needed is an efficient supply chain backed by improved infrastructure, cold storages, packing and transportation. The traditional system of distribution is just not capable of creating it.

The facilities and equipment provided by foreign investors can increase a workforce’s productivity in the target country.

Increase in a country’s income

Another big advantage of foreign direct investment is the increase of the target country’s income. With more jobs and higher wages, the national income normally increases which promotes economic growth.  Large corporations usually offer higher salary levels than what you would normally find in the target country, which can lead to an increment in income.

Hindrance to Domestic Investment
As it focuses its resources elsewhere other than the investor’s home country, foreign direct investment can sometimes hinder domestic investment.

Negative Influence on Exchange Rates
Foreign direct investments can occasionally affect exchange rates to the advantage of one country and the detriment of another.

Higher Costs
It is more expensive than when we export goods. So, it is very imperative to prepare sufficient money to set up operations.

Economic Non-Viability
Considering that foreign direct investments may be capital-intensive from the point of view of the investor, it can sometimes be very risky or economically non-viable.

Expropriation
Political changes can also lead to expropriation, which is a scenario where the government will have control over one’s property and assets.

Negative Impact on the Country’s Investment
The rules that govern foreign exchange rates and direct investments might negatively have an impact on the investing country. Investment may be banned in some foreign markets, which means that it is impossible to pursue an inviting opportunity.

Modern-Day Economic Colonialism
Many third-world countries, or at least those with history of colonialism, worry that foreign direct investment would result in some kind of modern day economic colonialism, which exposes host countries and leave them vulnerable to foreign companies’ exploitations.

Setback to The Trade Balance

FDI in retailing can upset the import balance, as large international retailers may prefer to source

majority of their products globally rather than investing in the local markets.

Contribution to the pollution

Foreign Direct Investments are one of the reason for exchange crisis at times. During the year 2000, the Southeast Asian countries experienced currency crisis because of the presence of FDls. With inflation contributed by them, exports have dwindled resulting in heavy fall in the value of domestic currency. As a result of this, the FDIs started withdrawing their capital leading to an exchange crisis. Thus, too much dependence on FDls will create exchange crisis.

In all the countries where the FDls have made an inroad, there has been a cultural shock experienced by the local people, adopting a different culture alien to the country. The domestic culture either disappears or suffers a setback. This is felt in the family structure, social setup and erosion in the value system of the people. Importance given to human relations, hither to suffers a setback with the hi-fi style of living.

The entry of global players may have towering impact on the real estate prices. With intensified fight for space in cities, the race may result in steep rise in real estate prices which could be counterproductive for the domestic players.

Financially strong giants will spread their function at multiple location to cater to maximum markets with full fledge infrastructure which is not possible for domestic player to cater.

In order to capture the foreign market, the FDIs have gone to the extent of even corrupting the high officials or the political bosses in various countries. Lockheed scandal of Japan is an example. In certain countries, the FDIs influence the political setup for achieving their personal gains. Most of the Latin American countries have experienced such a problem. Example: Drug trafficking, laundering of money, etc.

Inflation in the Economy

The presence of FDIs has also contributed to the inflation in the country. They spend lot of money on advertisement and on consumer promotion. This is done at the cost of the consumers and the price is increased. They also form cartels to control the market and exploit the consumer. The biggest world cartel, OPEC is an example of FDI exploiting the consumers.

The introduction of TRIPs (Trade Related Intellectual Property Rights) and TRIMs (Trade Related Investment Measures) has restricted the production of certain products in other countries. For example, India cannot manufacture certain medicines without paying royalties to the country which has originally invented the medicine. The same thing applies to seeds which are used in agriculture. Thus, the developing countries are made to either import the products or produce them through FDIs at a higher cost. WTO (World Trade Organization) is in favor of FDIs.